“That which always exists is only that ēkātma vastu [the one reality or substance, which is our own true self]. Since the ādi-guru at that time made that vastu to be known [only by] speaking without speaking, say, who can make it known [by] speaking?”

The word ēka means ‘one’, ātma means ‘self’, and vastu is the Sanskrit equivalent of the Tamil word poruḷ, which means the absolute reality, substance or essence. Therefore the ēkātma vastu, which Sri Ramana declares to be eppōdum uḷḷadu, ‘that which always is’, is the one absolute reality or essential substance, which is our own true self. END_OF_DOCUMENT_TOKEN_TO_BE_REPLACED

We are one spaceless and timeless being and there is no other. All of this moves as one, from the stars in outer space to the molecules and atoms. Nothing can move independently of the totality. This means all is synchronized within itself. Therefore the inexorable tendency for dynamic balance and harmony is the default of existence. Disturbances that could off-balance the totality cannot prevail, although it could appear so within the context of a human hour, day or lifetime. Additionally the underlying fact is that all phenomena are indeed images of name and form and thus none of them have a separate existence that could stand up against the interminable flux of the whole.

A specific form that believes itself to have an independent existence may very likely see itself being threatened in its existence by the permutations it observes. The one being, on the other hand cannot possibly sense a threat to itself as it remains what it is no matter what apparent movements occur within its being. That is why all the sages and wisdom schools stress that it the key to peace is to relinquish the “I am the body” idea. Since all sense of danger is something that occurs in our emotional body, that is where this shift needs to occur. We can ask ourselves: “Can I emotionally accept my own annihilation?”

Joseph Campbell’s metaphor of shifting a fall into a dive goes like this: You realize you are falling backwards off a cliff and so you are face up toward the sky seeing all move away from you. You have lost all sense of security and are falling down to something under you which you cannot see and so it is unknown. That causes fear. Now, deep down inside you decide to face the danger, no matter what it may be and so you shift your posture into a head-first dive. Suddenly you are no longer falling at the mercy of the tremendous force of gravity, but you are now diving with that force, with which you have aligned yourself.

Of course you were never apart from that Force because it is you true nature: you ARE that Force and nothing else. Only the magic of the mind conjures up the sense of being a separate being at the effect of outside forces. But we are not.

Every form is heading toward annihilation. Even if we conjure up a reincarnation scenario we cannot imagine an individual re-incarnating endlessly and senselessly into all eternity. Therefore we create the vision of the indestructible essence of an individual ‘soul’ that transmigrates through seemingly endless form, achieving ever ‘higher’ levels of development until Perfection and the God-Head is reached.

We are living already as an absolutely mysterious being that is able to “perform” every imaginable miracle and which has performed every miracle or ‘supernatural’ event ever reported. So what is the point of attempting to reach Perfection as an individual that is in reality nothing more than a mirage anyway? It is merely what we call “emotions” that stand in the way of whole-heartedly accepting ‘what is’, namely that ‘all that is’ is completely open to being seen at every moment:

yes, we are moving forms, which are living, 3-dimensional images in a reality of tangible phenomena;

yes, all phenomena appear (are born), remain (are maintained) for a certain while, and then, when their pull-date comes, they disappear (subside) again into the Unknown of prior-to-consciousness (birth and death);

yes, when they are gone, images and perceptions of “them” can be sustained for a while, and give us the sense that “they” are still “here”, albeit in “another dimension” etc.;

yes, we can hold on to pictures and images and resist the course of nature that relentlessly pulls them out of existence (manifestation=appearance);

yes, we can emotionally accept the natural course of events that will eventually annihilate all phenomena that are present in our lives right now, including own form;

yes, we can emotionally accept the fact that even now our apparent existence as individuals is really just an image, a concept with name and form, but free from any lasting attributes or real substance when compared to the one being;

and so, yes, even now we are annihilated when we accept the fact that we, as “individuals” never really existed in the first place, although what we perceive completely convinces us that we actually “are”, but we actually are “not”.

This is the beginning of the beautiful swan-dive into my own eternal essence as that which continually appears before me, as the one being that I alone am, ever new and ever mysterious.

That is what we have been talking about this morning, the emptying of the mind of the ‘me’ and ‘you’ and the ‘we’ and ‘they.’ Then you can live from moment to moment, endlessly, without struggle, without conflict. But that is real action, not conflict, brutality and violence.

from The Flight of the Eagle

END_OF_DOCUMENT_TOKEN_TO_BE_REPLACED

and see the beauty of that flower ~ Krishnamurti “By inquiring into the nature of the one in whom all of life appears as a play of contrasts, and recognising that the ‘person’ is only the most intimately assumed thought arising from consciousness—you sieve yourself out of confusion by discarding the false self-image.”
source: Mooji

freedom from the urge to see 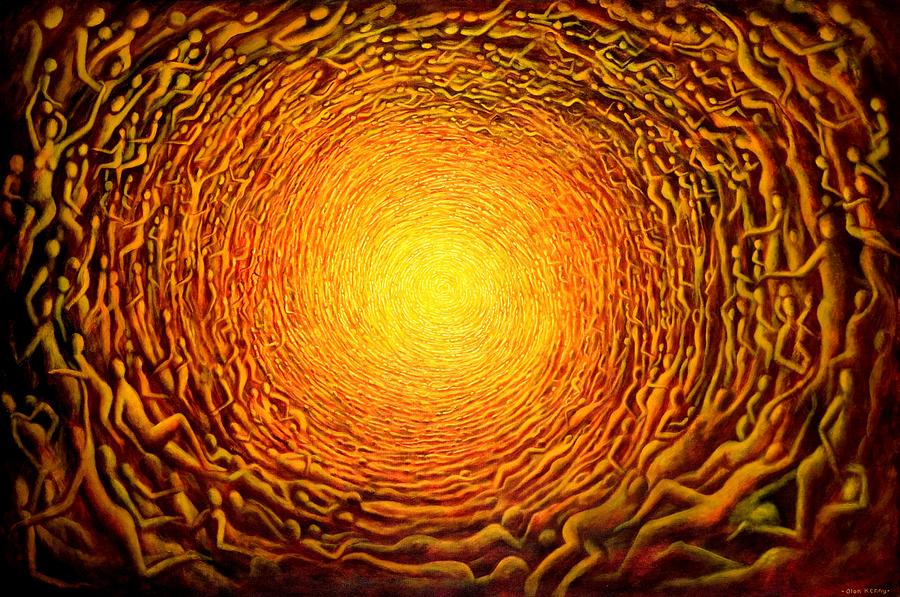 What does this mean? The urge to see is the mind seeking security: the urge to know the future – what is coming. Also the urge to hold in the mind the true nature of this existence. But the mind must give up and drop in order for ‘seeing’ to be, for ‘seeing is being’. There cannot be a subject (the mind) who sees and an object (existence) that is seen. This statement is very confounding for the mind and can bring it to a kind of ’tilt’ state. There is nowhere our cognitive faculty can go from here. This may be what Zen means with the term “ichigyo zammai“.

This Japanese Zen term translates as “one practice samadhi”, meaning everything you do is performed with a sense of your complete body-mind. In this way fragmentation of consciousness, one of the main reasons for suffering, is reduced or eliminated. The present moment then opens up and you begin to taste the depth of this NOW. You no longer entertain the thought about the ‘next moment’. It is the discipline of no longer feeding thoughts that come from the accumulated past and project into a ‘future’ moment. Ramana says this about the state of jagrat-sushupti (waking state-deep sleep):

“There is the awareness of the waking state and the stillness of sleep. It is called jagrat-sushupti [waking sleep]. Call it wakeful sleep or sleeping wakefulness or sleepless waking or wakeless sleep. It is not the same as sleep or waking separately. It is atijagrat  [beyond wakefulness] or atisushupti [beyond sleep]. It is the state of perfect awareness and perfect stillness combined.  …

“The thoughts make all the difference between the stillness of sleep and the turmoil of waking.”

Once there is there conviction that my true nature is freedom from thought, I no longer feed the thoughts that arise but let them play out their own dynamic without further interest. When my interest is on thoughts, my attention goes there and my energy feeds them. Then they are like seeds that sprout and grow and grow. I can then allow them to take me away from myself into interminable journeys that lead nowhere, but fascinate my mind. The alternative to following that fascination is to stop and endure the initial feeling of loss, or dullness and apathy. This is because the mind is being starved of its habitual food which is: I am the doer doing something, how wonderful!

There is sometimes a swath of boredom that assails the mind and suggests that it is nonsense to stop – there is nothing there to be found – give it up. This is the process of cutting through the Gordian Knot (chit-jada-granthi) and there is a certain kind of agony involved in the process. It can be swift and it can drag itself out over days or weeks in cycles going deeper and deeper. Once it is clear that the only way out of this delusional state is to gain more and more clarity then it is clear that all thoughts distort understanding. Only in the space free of attributes is real clarity and then it is free of words: it can only be ‘known’ as that which is one-without-a-second. Who, then, is there to tell about it?

for the root of thought

The first touch of tea on the tongue engages so much of the body’s sensory network and seduces me into the sleep of dwelling in the sense organs. The awareness of the evanescence of all phenomena is lost. Putting emphasis on the “beautiful and interesting things” in the world is like grasping a fistful of water. END_OF_DOCUMENT_TOKEN_TO_BE_REPLACED