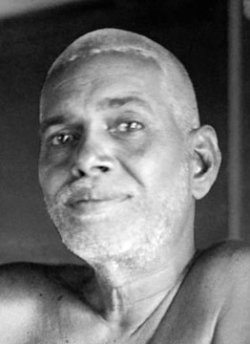 “Do not think yourself to be this, that or anything; to be so and so, or to be such and such. Only leave off the falsity. The Reality will reveal itself.”

Ramana said that the mind is only identity of the Self with the
body. It is a false ego that is created; it creates false phenomena in
its turn, and appears to move in them; all these are false. The Self
is the only Reality. If the false identity vanishes the persistence of
the Reality becomes apparent. It does not mean that Reality is not
here and now. It is always there and eternally the same. It is also in
everyone’s experience. For everyone knows that he is. “Who is he?”
Subjectively, “Who am I?” The false ego is associated with objects;
this ego itself is its own object. Objectivity is the falsity. Subject is
alone the Reality. Do not confound yourself with the object, namely
the body. This gives rise to the false ego, consequently of the world
and your movements therein with the resulting misery.

Do not think yourself
to be this, that or anything; to be so and so, or to be such
and such. Only leave off the falsity. The Reality will reveal itself.
The scriptures say that the Self is nityasiddha, ever present, and yet
speak of the removal of ajnana. If Self is (nitya) always and (siddha)
present, how can there be ajnana? For whom is the ajnana? These
are contradictory. But such statements are for guiding the earnest
seeker in the right way. He does not readily understand the only Truth
if mentioned in plain words (in the Bhagavad Gita) as in

(not thou, nor I, nor these kings …). Sri Krishna declared the Truth,
but Arjuna could not grasp it. Later Krishna plainly says that people
confound Him with the body, whereas in reality He was not born nor
will He die. Still Arjuna requires the whole Gita for the Truth to be
made clear to him.

New Earth Heartbeat by Tomas Qubeck is licensed under a Creative Commons Attribution-NonCommercial-NoDerivs 3.0 Unported License. All rights reserved as per Creative Commons License: see above link. Permissions for other uses: haudegen4711"at"gmail.com // I do not own rights to images sourced from Google; they are copyrighted by their creators unless otherwise noted. Click on image for link to source page.
Loading Comments...
%d bloggers like this: