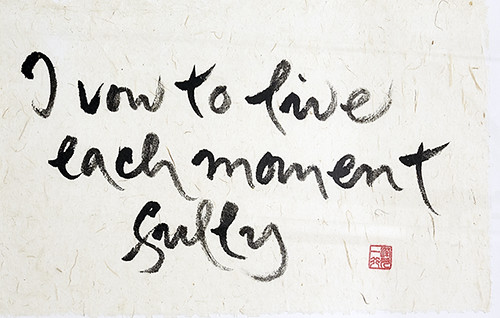 This is part two of two. The modern Zen master Thich Nhat Hanh expounds in a concise and everyday manner a basic understanding of Buddha’s teachings. This second part focuses on the second and third of the three Dharma Seals that the Buddha passed on to us: the teaching of no-self and nirvana. Thay gives us simple examples of how to practice these in our daily life. He makes it clear how understanding and practicing these basic teachings of the Buddha gives us a basis for clarity and a way of living with strong ethics. I find this essay so timely for each of us to support us in being part of the new earth that is emerging now. Enjoy part two!

THE PRACTICE OF LOOKING DEEPLY

Impermanence means being transformed at every moment. This is reality. And since there is nothing unchanging, how can there be a permanent self, a separate self? When we say “self,” we mean something that is always itself, unchanging day after day. But nothing is like that. Our body is impermanent, our emotions are impermanent and our perceptions are impermanent. Our anger, our sadness, our love, our hatred and our consciousness are also impermanent. So what permanent thing is there that we can call a self?

The piece of paper on which these words are written does not have a separate self. It can only be present when the clouds, the forest, the sun, the earth, the people who make the paper, and the machines are present. If those things are not present, the paper cannot be present. And if we bum the paper, where is the self of paper?

The flower cannot be by herself alone. The flower has to inter-be with the sunshine, the cloud and everything in the cosmos. If we understand being in terms of inter-being, then we are much closer to the truth. Inter-being is not being and it is not non-being. Inter-being means being empty of a separate identity, empty of a separate self. No self also means emptiness, a technical term in Buddhism that means the absence of a separate self. We are of the nature of no self, but that does not mean that we are not here. It does not mean that nothing exists. A glass can be empty or full of tea, but in order to be either empty or full, the glass has to be there. So emptiness does not mean nonbeing, and it does not mean being either. It transcends all concepts. If you touch deeply the nature of impermanence, no self and inter-being, you touch the ultimate dimension, the nature of nirvana.

We think of our body as our self or belonging to our self. We think of our body as me or mine. But if you look deeply, you see that your body is also the body of your ancestors, of your parents, of your children and of their children. So it is not a “me,” it is not a “mine.” Your body is full of everything else – limitless non-body elements – except one thing: a separate existence. Impermanence has to be seen in the light of emptiness, of inter-being and of non-self. These things are not negative. Emptiness is wonderful. Nagarjuna, the famous Buddhist teacher of the second century, said, “Thanks to emptiness, everything is possible.”

Clones: No Permanent Self

If you take three cells from my body to make clones and make three children from these cells, all of them will have the genetic inheritance of my blood family and myself. But we all have one more inheritance. The body we inherit from our family is nature. We also have an inheritance from our environment. That is nurture. So imagine that we put these three clones into three different environments. If one of the children is put into an environment of drugs and gambling, he will probably become a person who enjoys drugs and gambling. He will not be a Buddhist monk like I am now. If you put another cloned child into an environment of business and send him to a business school, he will probably become a businessman. This would occur even though the clones will all have the same genetic inheritance as I do. But I have been penetrated by the Buddha dharma.

The teachings of the Buddha and the practice will not be watered by business school. The seeds of selling, buying and business will be watered. That clone may become a businessman. Although the eyes, nose and ears will look just like me, this clone will be nothing like me.

Let us say that we allow the third clone to become a monk. We put him in the Deer Park Monastery to be brought up by monks and nuns. Every day he hears the sutras and does walking meditation. That child will be more like the monk I am today.

Nurture is extremely important. If you make three clones or three thousand clones, the particular manifestation of the clone depends on the conditions that nurture that clone; the thinking, the love, the hate, the studying and the work that surround him or her. Imagine if there are people who are afraid to let me go and they say: “Please give us a cell for us to clone.” If I were to agree, I would also have to say: “Well, please let that clone be in a monastery like the Deer Park Monastery in California, or Maple Forest Monastery in Vermont; otherwise, he will suffer.”

In Buddhism there are no ideas or prejudices that we kill for. We do not kill people simply because they do not accept our religion. The teachings of the Buddha are skillful means; they are not absolute truth. So we have to say that impermanence and no self are skillful means to help us come toward the truth; they are not absolute truth. The Buddha said: “My teachings are a finger pointing to the moon. Do not get caught in thinking that the finger is the moon. It is because of the finger that you can see the moon.”

No self and impermanence are means to understand the truth; they are not the truth itself. They are instruments; they are not the ultimate truth. Impermanence is not a doctrine that you should feel you have to die for. You would never put someone in prison because they contradict you. You are not using one concept against another concept. These means are to lead us to the ultimate truth. Buddhism is a skillful path to help us; it is not a path of fanatics. Buddhists can never go to war, shedding blood and killing thousands of people on behalf of religion.

Because impermanence contains within herself the nature of nirvana, you are safe from being caught in an idea. When you study and practice this teaching, you free yourself from notions and concepts, including the concept of permanence and impermanence. This way, we arrive at freedom from suffering and fear. This is nirvana, the kingdom of God.

We are scared because of our notions of birth and death, increasing and decreasing, being and non-being. Nirvana means extinction of all notions and ideas. If we can become free from these notions, we can touch the peace of our true nature.

There are eight basic concepts that serve to fuel our fear. They are the notions of birth and death, coming and going, the same and different, being and non-being. These notions keep us from being happy. The teaching given to counteract these notions is called “the eight no’s,” which are no birth, no death, no coming, no going, not the same, not different, no being, no non-being.

Each of us has a notion of how we can be happy. It would be very helpful if we took the time to reconsider our notions of happiness. We could make a list of what we think we need to be happy: “I can only be happy if … ” Write down the things you want and the things you do not want. Where did these ideas come from? Are they reality? Or are they only your notions? If you are committed to a particular notion of happiness, you do not have much chance to be happy.

Happiness arrives from many directions. If you have a notion that it comes only from one direction, you will miss all of these other opportunities because you want happiness to come only from the direction you want. You say, “I would rather die than marry anyone but her. I would rather die than lose my job, my reputation. I cannot be happy if I don’t get that degree or that promotion or that house.” You have put many conditions on your happiness. And then, even if you do have all your conditions met, you still won’t be happy. You will just keep creating new conditions for your happiness. You will still want the higher degree, the better job and the more beautiful house.

A government can also believe that they know the only way to make a nation prosper and be happy. That government and nation may commit itself to that ideology for one hundred years or more. During that time its citizens can suffer so much. Anyone who disagrees or dares to speak against the government’s ideas will be locked up. They might even be considered insane. You can transform your nation into a prison because you are committed to an ideology.